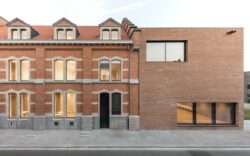 Utopia, Library and Academy for Performing Arts, incorporates a striking historic building from the second half of the nineteenth century and rejuvenates the urban landscape while elegantly giving expression to the required functionality. The new building designed by KAAN Architecten has been slotted into the urban fabric to enhance the characteristic irregular streets, intimate spaces and public squares of the city centre, and to interact with them.

The new complex in the heart of the Belgian city of Aalst has a lively, urban character. It may sound contradictory, but precisely because the plan of the design is functional, the result is a certain spatial freedom that enriches the experience of the building. The old Pupillenschool is now the cornerstone of the complex. Both outside and inside, the historic façades blend perfectly, while the brickwork dialogues with light grey concrete elements. Utopia, the city, and its residents are inextricably linked and can gaze at each other through tall and wide openings.

Inside, the open interior landscape of the building unfolds from floor to ceiling and cantilevered into the space are several thick concrete floors that appear to float. Hanging at varying heights, each level features bookshelves and reading tables, while looking into the atrium and towards the brick façade of the pre-existing building. Moreover, a 11.5-meter-high bookcase stretches towards the ceiling, filled with books donated by residents of Aalst.

The staircase has a sculptural presence at the periphery of the magnificent atrium and reading room. All technical systems are concealed behind an expanded metal ceiling that softens the strong daylight and creates a pleasant atmosphere during the day. The Academy for Performing Arts is housed on the first two floors. Within the new building, the ballet room, rehearsal studios and teaching spaces have windows as tall and wide as the rooms themselves, providing a view onto the city and a glimpse inwards from the city.

Utopia’s openness also exudes sustainability. The building has achieved an BREEAM Excellent rating: materials and labour were locally sourced, low-energy machines were used for construction, solar panels, geothermal heat and LED lighting have been integrated in the design, rainwater is recuperated and buffered, and 230.000 bricks were chipped away and reused elsewhere. In the first year of opening, Utopia has welcomed half a million visitors. The desire to interact with the urban fabric has been achieved: Utopia is now a reference point in Aalst city centre.