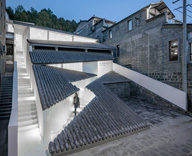 Annso Hill is a cutting-edge boutique hotel, located in Heshun’s ancient town of Yunnan. The site is composed of two characteristically different lot spaces, both challenging the connectivity and integrity of its architecture. Rather than competing with adjacent shops and facades in elevation, Annso Hill chooses to step back and rejoin the landscape directly as its formal strategy. Constrained alongside the hill, its roof shifts and climbs 30m upwards, while the frontal tiles touch the ground on the alley’s edge. As a result, this approach provides an open living space for the public realm; an extreme rarity in Heshun, enticing visitors and locals to be drawn towards any areas of potential creative activities or social programmes. This tilted geometry also adds a new trajectory of complex relationships that is perpendicular to the linear street, which connects, by a sequence of living conditions, both visually and spatially with the town and the  ‘hidden’ hill. As a result, the forest backdrop is now visually brought to the fore, and superimposes with the overlapping roofs and walls, providing a new visual reading of a multilayered 3D facade.

The entrance way cuts through the roofs, and leads the hotel to another world. It is an ambiguous play between roofs and walls, facades and grounds, elevations and planes; it is designed as an architectural ‘field’ instead of architectural ‘rooms’. All of the interactive programmes and creative activities, such as the cafe and bar, gallery, DIY and yoga area, flow alongside the movements of the transitioning ground. The public space is thus justified by area conditions, and is continuously being redefined by the sequence of events.

A flying corridor connects all 15 of the guest rooms in the back, beside the serene and tranquil hill. All rooms are unique in their formal responses to site  specifications, and in their unique exclusive axis of view. An architectural operation of 2.5D spatial strategy is thus introduced; collectively identifying specific visual movements and programmatic performances within each space.

All walls shift and are allowed to sculpt in, thereby creating another dimension for spatial perusing and practical use. There is an emphasis on the play of light and shadow via the manipulation of the geometrical relationship between walls and windows. All objects in the guest rooms are arranged in the lower horizontal
zone, leaving the higher space to concentrate on the grand spectacle of unique views from the all-encompassing outdoors.

Annso Hill is a unique boutique hotel serving as a cultural and living space for innovative ideas and creative experiences. As such, it expounds a new definition for both the architectural and cultural values of Heshun’s ancient town.