West-line Studio, ‘Up to the Mountain and Down to the River’, Fuxing Town, China 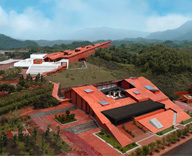 West-line Studio, ‘Up to the Mountain and Down to the River’, Fuxing Town, China

The complex, located in the Chishui Danxia UNESCO World Heritage region, comprises two main buildings, a visitor centre and an exhibition centre, which put in relationship the mountain with the nearby Chishui River. The visitor centre is located on the hillside while the exhibition centre occupies a lower position,  along the river bank. They are connected by a red holistic base and a system of paths. The terrain has not been modified; the architects decided to comply with the characteristics of the site, using the landscape and the paths to provide order and connect the two buildings.

The whole complex is strongly characterised by the red colour given by the local Danxia stone. The use of this stone, which respects and takes advantage of its  peculiar natural characteristics, gives the building its unique ‘red personality’, making it part of the surrounding landscape. The combination of fluctuating roof, stocked base and penetrating facade recall the typical dwellings of northern Guizhou villages.

The visitor centre, known as ‘mountain settlement’ in Chinese, with its distinctive cone body, follows a mountain settlement model, and stands over a white marble basement. The white volume recalls the parallel platforms typical of the local mountain villages’ settlements in northern Guizhou. The insertion of this white pedestal, which works as an enclosed courtyard, also symbolises the Chinese rituality used in the traditional white courtyards. The building follows a centripetal concept: the conic volume controls the whole building and the environment all around, including the exhibition centre placed below. The main functions are: tourist hall, ticket office, waiting room, restaurant, command centre, administrative office area, etc. A system of platforms and steps extends to the Chishui River, following the terrain and creating a connection with the lower exhibition centre.

The exhibition centre is named in Chinese the ‘settlement near the water’, because it follows the prototype of dwellings near the water, in the style of those of the northern Guizhou area.

The whole building has been designed following the movement of the soil in a circular route around the central larger open courtyard, which is surrounded by a system of smaller courtyards. The exhibition centre extends delicately through the river, following the terrain movement and also dealing with the centripetal concept, this time in a lower posture. The building works as the official Danxia World Natural Heritage site’s exhibition area, including offices and an integrated service hall.