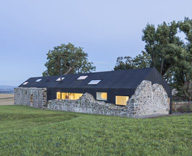 This private house in Scotland, completed in 2016, was built within the existing stone ruins of an old farmhouse, with beautiful views northwards down two valleys for more than 50 miles.

Located in a remote countryside area, this project was conceived to near Passivhaus standards with a super insulated envelope and use of solar energy.

The existing ruin, originally constructed in the 18th century, was transformed several times revealing a palimpsest of occupation on the site. The designers wanted to highlight this historical layering by adding a sequence of counterpoint materials and geometries within the design. The first layer is the existing stone wall, within which sits a black waterproofing EPDM rubber clad pitched-roof envelope, and within that a curvilinear interior tube wall system. This interior curved surface is made of insulating recycled polystyrene blocks within a gridded wood structure, and is covered with glass-reinforced plastic.

Emphasising the narrative of time, these three layers also reflect different architectural expressions: the random natural erosion of stone walls, an archetypical minimalist pitched roof and a free-form double curved surface. These three layers are not designed as independent parts, but rather take on meaning as their relationship evolves through the building’s sections. They separate, come together and intertwine, creating a series of architectural singularities.

In the ‘tube’ are the more public programmes of the kitchen, sitting and dining room. At both ends of the house, the tube detaches from the envelope to create rooms that are used for the more private functions of bedrooms, bathrooms and storage. To access these spaces, the tube’s non-linear curved surface ramps up, producing a dynamic sensory experience. The existing ruined walls, and views from the site, dictate the locations of large windows and doors. At these openings, the tube funnels out towards the light, creating a space that can be used for furniture and storage. Bookshelves, a sofa and seating are created by ‘pulling’ the structural grid through the surface of the GRP walls as they seem to be peeling off the tube.

The landscape around the house is rolling hills with drystone walls defining cow fields. The juxtaposition between straight ancient stone walls and organic topography continues in the garden with gentle landforms bringing the distant landscape towards the house. The design has preserved the ruin walls, and
reinstituted the pitched roof that would have been there originally, providing an external coherence. However, the matt black rubber exterior and soft curves of the interior are a more counterpoint preservation, accentuating the palimpsest nature of occupation on the site, and the pleasure of living within layers of history.