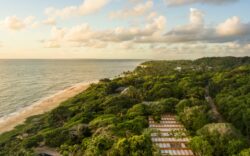 There are limits, such as the ocean, that appear to our eyes and soul like boundless openings. When confronted with these powerful natural elements, architecture must also open itself and project towards the limit. The house on the Sand, with its extraordinary view to the Atlantic Ocean in the northeast of Brazil, undertakes this venture.
The house expresses an authentic experimentation around the dissolution of architecture into its natural surroundings. The functional program is reduced to the bare minimum and the house lacks closed spaces that are not strictly necessary (corridors, entrance halls). Confined spaces are reduced to only the essential living areas that are condensed into five separate volumes, five capsules of life, each essentially committed to a single function: one for the kitchen, one for the dining room, one for the living room, the master bedroom and another for the guest bedrooms.
The volumes rest upon an elongated rectangular wooden deck, slightly raised above the ground, next to each other yet slightly detached. The entire structure is covered by a rustic eucalyptus pergola supported by 14 laminated wood frames. The rigor and logic of the modernist structure is broken by an important detail: the continuity of the twelve rectangular openings in the canopy is interrupted by several trees that are embraced by the deck, allowing the entrance of direct sunlight into the spaces. This contrast between rationality and transience reduces the gap between architecture and nature.
Life takes place inside the volumes and on the wooden deck, which becomes the connective tissue of the house, allowing for movement between spaces. Atmospheric agents, such as sunlight and rain, are filtered by the covering to create suggestive shadows that converse with the shades caused by the foliage of the numerous trees that surround the house and cover the entire lot all the way to the beach. Everywhere within the property’s spaces, one can feel immersed in a suspended atmosphere in which shadows and leaves split the sunrays creating a constant and poetic rain of shadows throughout the day.
In Trancoso the house abandons any reference to the dwelling machine of the modernist evocation and offers itself as a sensorial machine in which nature, light, shadows and the constant and infinite sound of the ocean become the fundamental materials of the project.