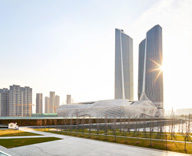 The master plan expresses the continuity and connectivity between the urban environment of Hexi New Town, riverside parkland and the rural landscapes of Jiangxinzhou Island in the Yangtzer River, connected by a pedestrian bridge.

The centre occupies a site area of 5.2ha with a construction floor space of 465,000m². The taller tower is 315m (68 floors) high, and contains offices and the Jumeirah Hotel. The shorter tower, 255m (59 floors) in height, houses a further four-star hotel. Both towers share a five-level, mixed-use podium that houses the cultural centre.

The four major programme elements of the cultural centre (a conference hall, an auditorium, a multifunctional hall and a guest zone) are independent volumes surrounding a central courtyard. These four elements merge into a singular whole at higher levels, allowing pedestrians to walk through an open landscape at  ground level. The conference hall seats 2,100 and is equipped with a multipurpose proscenium stage suitable for conferences, cultural and theatrical events. The auditorium seats 500 and is optimised for both acoustic orchestral performances and also shows using audio equipment. The towers create a dynamic transition from the vertical mass of the urban CBD to the horizontal topography of the river. The taller tower signifies the position of the plaza both within the urban grid of Hexi New Town and on the Nanjing Skyline.

The natural landscape of the river is connected to the urban streetscape of the new CBD through the fluid architectural language of the mixed-use podium and conference centre. This architectural composition juxtaposes the vertical (city) and horizontal (river and landscape).

At the interface between the tower and podium, the glass facade transforms into a grid of rhomboid fibre-concrete panels, giving the large surfaces of podium and conference centre a solid and sculptural appearance, underlining the dynamic character of the form and providing daylight to the building’s interior.

The centre is the first completely top-down/bottom-up tower construction in China – starting at street level, and building upwards and downwards in tandem – constructed in only 34 months using expertise and experience in 3D digital building information modelling (BIM) design and construction management to reduce the onsite programme by a year to only 18 months.