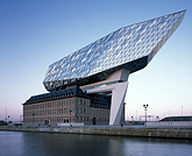 The new Port House in Antwerp repurposes, renovates and extends a derelict fire station into a new headquarters for the port, bringing together the port’s 500 staff that previously worked in separate buildings around the city.

Following the construction of a new fire station, the old station – a listed replica of a Hanseatic residence – became redundant. This disused fire station had to be integrated into the new project. The design is informed by detailed historical research, and a thorough analysis of the site and the existing building. The historic analysis of the old fire station also highlighted the role of its originally intended tower, which was never realised.

The design is an elevated extension, rather than a neighbouring volume, which would have concealed the existing facades. Surrounded by water, the new extension’s facade is a glazed surface that ripples like waves, and reflects the changing tones and colours of the city’s sky.

The facade’s rippling quality is generated with flat facets to the south that gradually become more three-dimensional towards to the north. This perception of a transparent volume, cut to give the new building its sparkling appearance, reinterprets Antwerp’s moniker as the city of diamonds.

The old fire station’s central courtyard has been enclosed with a glass roof and transformed into the main reception area. From this central atrium, visitors access the historic public reading room and library within the disused fire truck hall. Panoramic lifts provide direct access to the new extension, with an external bridge between the existing building and new extension giving panoramic views of the city and port. The client requirements for an ‘activity-based office’ are integrated within the design, along with related areas such as the restaurant, meeting rooms and auditorium.

With constant references to the Scheldt, the city of Antwerp and the dynamics of its port, married with the successful renovation and reuse of a redundant fire station – integrating it as a fully fledged part of its headquarters – the new Port House will serve the port well through its planned expansion in the future.

‘’The client required a sustainable and future-proof workplace for its employees, representing its ethos and values in an ever-expanding local and international arena. This resulted in an architectural competition being organised with only one rule laid down in the competition, that the original building, a former listed fire station designed as a replica of a Hanseatic residence, had to be preserved. The judges found it hard to resist the bravura of the dynamic and ambitious solution that creates a unique contemporary new structure in shining faceted glass, floating like the bow of a ship above the old building, maintaining and integrating the existing building with the new as a unified whole, and at the same time putting the previously run down location now firmly on the architectural world map.”