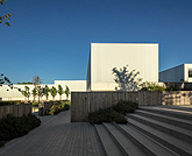 This project brief was for the creation of a gated community of houses on the outskirts of Madrid. Caledonian Somosaguas is an ‘anti-crisis’ product that responded to the demand for housing.

The project had to adapt the ‘made to order’ architectural details for the larger scale and should use industrialised products, available in the European market.

The land occupies an entire block. The underground garage leaves the ground floor free to be used by the pedestrians and allows home access for those who reside there. There are 21 houses in total, organised on five plateaus that overcome the uneven topography of 3.5m. The perimeter of the street is on the same level as the surrounding pavements. Four different-sized houses were designed following the 1.25m building module; from these, there are 21 different configurations. Each house is unique. The relation between the size of the lot (0.75ha) and the population (estimated at 97 people) results in a demographic density of 130 inhabitants a hectare. An expressive number given that the density of Madrid is 54 inhabitants a hectare, according to Portal del Ayuntamiento de Madrid.

The architecture uses simple, industrial and monochromatic material. Visually it is difficult to distinguish the unit from the group; the mini-wave and white-painted brick facades contrast with the wooden fences that edge the paths. Rich and abundant landscaping permeates the entire lot, and spreads in an organic way breaking the orthogonal angles of the volumes.

The non-linear placement of the houses makes it appear similar to a ‘pueblo’, with different paths inside the lot. The notion of ownership of the lot is diluted; the houses are built over gardens, with common fruition and a private patio for each unit. There is a delicate transition between the private and public spaces. In the middle is the main square, which provides a meeting place around the pool.

The relationship between the block and the city happens in a permeable way. There are no external walls, and the houses themselves create a non-linear divide between the street and the block which, in turn, create breathing space and more generous gardens for the public walkway.

The Caledonian Somosaguas project is a meta-project. The permeable occupation of an urban block for pedestrians can be replicated on any other urban lot in any city, and each block can house different equipment for common use. The project intends to maximise collective living in the city.

“The intensity, the qualities in between spaces, the mix of paved and green areas is of exceptional quality”

“The spaces between the buildings set the building apart…….and the way of the detailing and the landscaping sets it apart”

“By the composition they are all very unique”